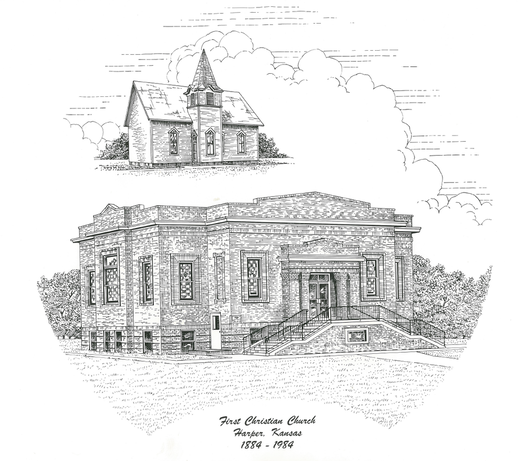 The church began in June 1879 with a meeting held at the J.B. Brodnix residence to organize a congregation of Christians for the purpose of holding worship services.  The  original charter of the church was drawn by trustees W.G. Mahen, L.K. Sitter,  A.G. Patton, J.L. Garner, Zack C. Thompson and J.C. Houser and filed with the Secretary of State on July 14, 1884.

In January of 1883, the lot on which the present building is  located was purchased.  By October of 1884 the erection of a 32x48 frame  building on a foundation of dressed stone was begun.  The building was damaged by a tornado on May 27, 1892.  With some remodeling, this frame building served the congregation until  1917.  The present building was  constructed from 1917-1918 under the leadership of W.E. Kelly, the minister at that time.  The dedication of this  new building took place January 27, 1918 while a blizzard raged.  The building has undergone several upgrades and remodeling over the years  to include a sound and video system, an elevator and an updated kitchen.

The Harper Christian Church has been blessed with the ability to  assist in establishing a Christian camp in Arkansas City, Kansas.   The Church has an organized youth program and provides a fun learning  environment.